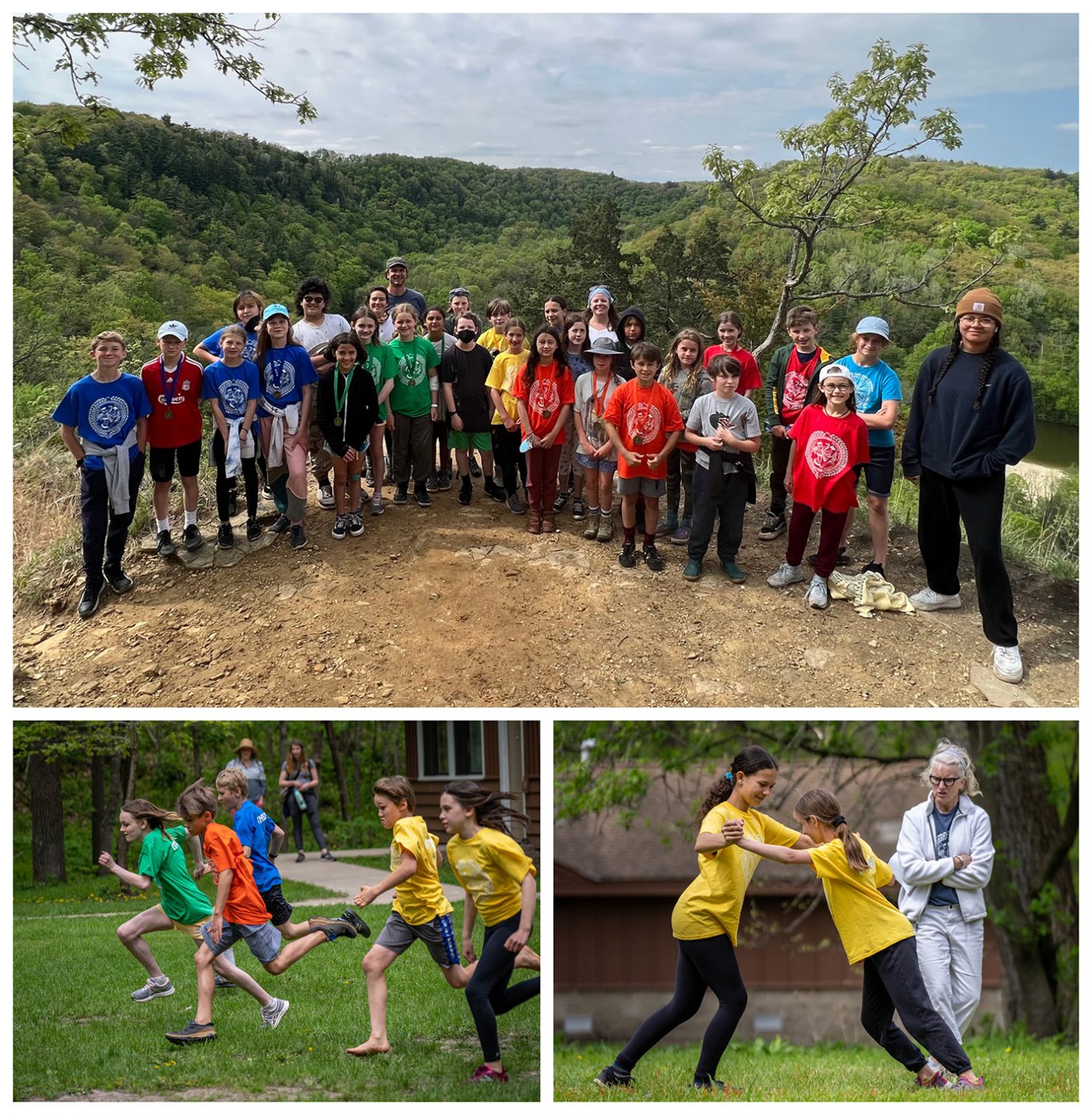 This year’s Pentathlon was like no other. First of all, it was held at the magnificent Whitewater State Park rather than being held locally (as we have done the past two years due to COVID restraints) or in Ferryville, Wisconsin, where most of our Pentathlons have taken place in the past. But what really made this year’s event unique was the people who came together to make it happen.

Allow me to paint a picture for you: a natural silence falls upon the participants and spectators as the five event leaders, dressed all in white, begin to move slowly together. Our attention is taken to the invitation of the movement, the song of the river jumping over the rocks behind the teachers, the eagle circling the majestic bluffs above, the students eager for the games to begin. I was honored to be a part of that group dressed in white. I stood next to my dear assistant teacher, Maya Dunn; our beloved colleague and friend of both schools, Ann Meany; Russell Harris, who served as my assistant in the past and is now the lead Movement teacher at the Minnesota Waldorf School; and our visiting guest artist/teacher from Costa Rica, Marisol Vargas. Together we welcomed the athletes and their families and friends who came to witness their efforts as they participated in all five of the Pentathlon events of Javelin, Discus, Running, Long Jump and Wrestling.

Our students were joined by the fifth graders from the Minnesota Waldorf School. They had already formed pen pals with each other earlier in the year, so it was easy for them to connect and deepen their friendships. Together we spent three days in glorious competition. That’s quite a juxtaposition isn’t it? But indeed the Pentathlon is a unique form of competition in which the goal is to seek glory. By that I mean that each of the pentathletes strive to do their very best and in so doing, they reach towards the archetypal movements in each event. Zeus and Athena were there to watch and Apollo kept gracing the fields with his sun-filled presence. As the day progressed the students were recognized for the moments that they shone, and in return they brought glory to themselves, their city-state, and their school. (Special thanks to all of the city-state leaders who held and witnessed the students throughout the day.)

Glory can be defined as great beauty and splendor, but also as honor, admiration, or distinction. In religious terms it is thought of as the manifestation of the presence of God. At the Pentathlon, we see the glory that the students bring as that part of humanity which strives to do their very best and serves as a reminder of all that is possible. It is a precious and beautiful gift to behold.

Some memorable highlights (of which there were many), was when two students fell on hard concrete during the first running event and stood up with smiles on their faces. They tended to their wounds and then rejoined the group with perseverance and complete determination to carry on undeterred. One student, after running in the 40 yard dash, said with a beaming smile on her face, “I feel like that was the fastest that I have ever run in my entire life.” The sentiment was confirmed by those who witnessed her. Another student joyfully took on the challenge of jumping farther than anyone else and then tried throwing the javelin further than anyone else during the finals round. Through an impressive display of the power of the ideal form and dynamic, he was successful in both of his final attempts! This is only a sample of the many incredibly inspiring and beautiful moments of sportspersonship that we witnessed throughout the day.

Perhaps my favorite moment was watching Marisol lead the Javelin event in the finals. Although her English is very good, she was struggling at first to address the students and all the parents using a second language. So she abandoned English and spoke beautifully and eloquently in Spanish while demonstrating the movements that we were looking for in the throw.  Everyone understood the meaning clearly and perhaps even better than before. Watching her then call out the commands and shout the word “¡Lanza!” (“throw” in Spanish) over and over again created long lasting memories for the students and spectators. It was this spirit of inclusion that echoed in the valley of the games.

We also had the treat of watching Marisol and Mr. Harris playfully dancing, kicking, and hand standing in the Brazilian martial art of Capoeira. We ate well (thanks to so many amazing parents that helped make it all happen), we played many games, and sang many songs (thanks to the class teachers). I remember returning from a hike in the evening after the games to the sound of both schools singing “Oh How Lovely is the Evening” in a stunning three part round. It ended with the song of nature singing back to them as the students rushed off to their cabins after a truly glorious day. Thank you Mr. Burnstein, Ms. Holt, Maya Dunn, Ann Meany, Marisol Vargas, all of our incredible 5th grade parent volunteers, and the teachers and parents from MWS for making this event possible for our students. Often we don’t realize how much work goes into an experience that feels so effortless and “right”, or perhaps we do realize it but get caught up in our day-to-day and forget to pause and express our gratitude. Let us take that pause now, and extend our sincere thanks to the teachers and parents who organized, facilitated, and held this experience — one of the great highlights of the grade school journey, in so many ways — for our 5th grade students and their families.